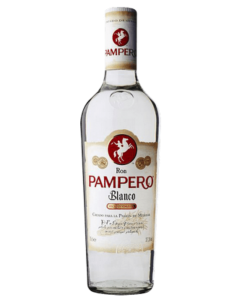 Pampero rum is an authentic Venezuelan rum of extremely high quality. Industria Pampero originated in 1938 from the son of fisherman Alejandro Hernandez and Luis Manuel Toro. Hernandez’s original recipe presents a distillation process unique to Venezuela. He harvested the best sugar cane only during the extremely wet dry season to get more mellow alcohol. Mixed with the local Carbonero spring water, this alcohol creates a characteristic deep, complex, and emotional drink with a surprisingly soft and finished taste. Pampero’s name comes from a strong three-day thunderstorm, the so-called “pamperos”, which has broken out over the fields of Latin America.