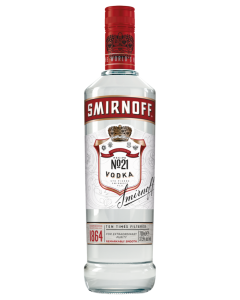 Smirnoff No.21 is the number one vodka in the world. Good vodka is the well-filtered vodka. After the distillation of Smirnoff No.21, an 8-hour process of filtration through charcoal from Eastern European silver birch, specially grown for Smirnoff in Poland, takes place. The filtration is repeated 10 times to precisely remove all impurities. The secret of filtration makes Smirnoff No.21 the most neutral vodka in the world – colorless, and odorless. Smirnoff No.21, unlike many other vodkas, contains absolutely no additives to soften the taste. All you get is pure vodka with the most neutral taste. Ideal for mixing.

Smirnoff’s legacy after the Bolshevik revolution and the nationalization of the factory, Vladimir Smirnov, Pyotr Arsenievich’s third son, was completely ruined. Arrested and after receiving but not serving several death sentences, he managed to escape from Russia to France, where he adopted the French version of his surname, Smirnoff. In 1923 he founded the company ‘Pierre Smirnoff & Sons’. In 1933, already in America, Vladimir was again facing bankruptcy. He managed to sell the rights to produce Smirnoff vodka, but vodka in America was still an unpopular drink in the bourbon-dominated American market. Then marketing comes to the rescue. With the ingenious positioning of “white whiskey” and the promotion of cocktails, in 1940 Smirnoff was already a very popular drink. Smirnoff sparked the “cocktail revolution” in America, promoting the Moscow Mule, Vodka Martini, ScrewDriver, and Bloody Merry cocktails.