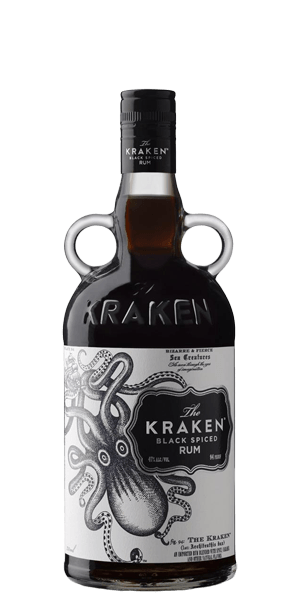 The Kraken is here! What is The Kraken – the world’s first black spiced rum, with a rich taste and in a distinctive Victorian bottle.

The Kraken Black Spiced Rum is named after the sea monster from mythology. Legend has it that the monster sank the largest rum ship in the world, destroying all rum barrels – except one, which was sprayed with ink by the sea monster. We can’t say that’s how this great rum came alive, but we can say that, like its name, the rum is dark, strong and mysterious.

The bottle is in a classic Victorian style with two “ears”, which during shipping were used to attach the bottles to the walls and ceiling so that they do not break. The label shows the creature from mythology, which resembles a large cuttlefish. The liquid is black and resembles the color of ink or molasses. When you smell it, you can feel mainly notes of cinnamon, chocolate and coffee. When drunk, you can feel sweet molasses with a lot of vanilla and a hint of ginger. Cinnamon, cloves and chocolate can also be felt. The aftertaste is warming, with a memory of sweet oak and vanilla and light peppery notes.

The Kraken Rum is a universal drink that can be consumed in different ways and for different occasions. You can consume this rum all year-round neat, in shots, with tea, in cocktails or in the classic Kraken & Coke combination. The combinations and possibilities are many.

We invite you to try The Kraken Black Spiced Rum… if you dare.

Avendi enriched its portfolio with another brand – VEGETA

The new addition to the Moët Hennessy family – The first...

Avendi in a new strategic partnership

The Kraken – rum as dark and strong as the sea...

The story of Hennessy X.O is an odyssey that is now...